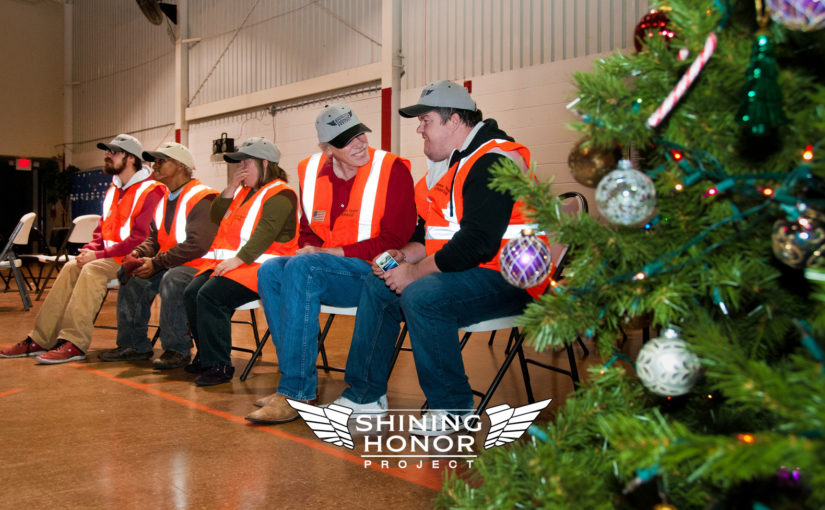 It was the first cold day of winter and just two days before Christmas, so the gifts were timed perfectly on both accounts.

“Our gifts for them were very deliberate,” Wambold said. “We wanted them to have jackets that they could utilize all year.” The jackets are water repellant and wind resistant and have the Shining Honor Team logo on them so they can be worn proudly.

As for the gift card, she says many times when you receive a gift, you open it and it is over. But the gift card empowers Shining Honor Team members to go as a group together to Walmart. They will be able to go to the socks and underwear department, see all the different kinds and pick out the size and style that works best for them.

“They will get to interact with the cashier at the store, be able to pull their gift card out from their pocket and pay for their items themselves,” Wambold said. “What a sense of pride for them, these are things that we just take for granted.”

Sitting in a circle, with the Christmas tree as a backdrop in the gym on the Gatesway Foundation Broken Arrow campus, they waited with anticipation, for their names to be called individually, each responding differently. Some were bashful, some were smiling ear to ear, but all were thankful. Prior to the start of the party, Tony and David talked about what they wanted for Christmas. David wants a car, an Audi specifically.

Tony says he once received a watch from a friend, “And, it’s real gold,” he said. And remembering his mother who has passed away he said, “We’re gonna go celebrate Momma’s birthday and we’re gonna go out and eat.”

It was Tony’s name that was the first to be called at the start of the celebration. “You have two presents,” Wambold told him.

“Oh gosh!” he said. “I don’t want to open it yet,” choosing instead to savor the moment. As Wambold played Santa, even wearing a red and white Santa Claus cap, the Honor Team members patiently waited and then stood and received their gifts and posed for photos in front of the Christmas tree.

“An awful lot of our individuals don’t have any family or have very little income outside of Shining Honor Project,” said Gatesway Interim Director Gloria Morton. “These things, a Walmart gift card and a really nice jacket are out of their realm of things that they would ever hope to receive.” “I like my coat,” Tony said. “I look handsome in it.”

The jacket triggers a memory of a trip he made to Vermont when he was younger. Smiling widely, he says all the ladies were after him.

Just before the party, he had gotten a fresh shave. Several people commented about how nice he looked, younger even than his age at 58.

“They’ve gotten so close to Erin and the other Shining Honor Project folks, it’s really become a family,” Morton said. “It’s increased their self-esteem. It’s the things we take for granted, that they just don’t have. For the first time, they’ve got money in their pockets.”