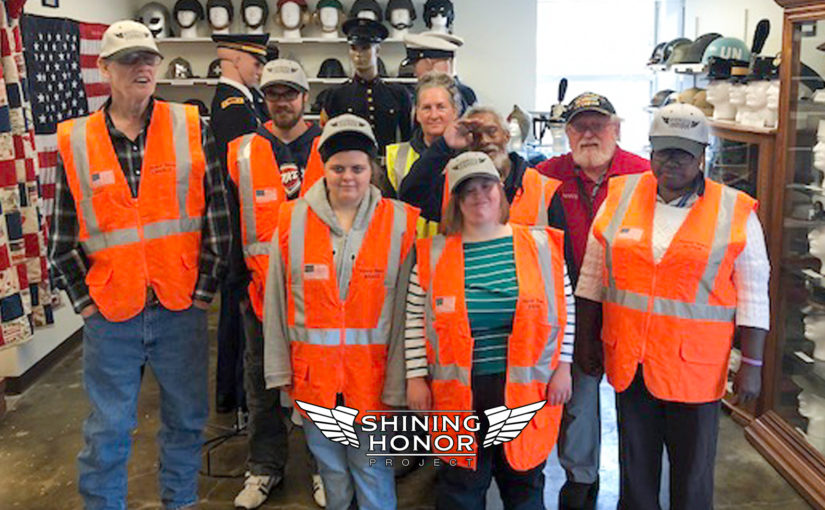 Shining Honor Project’s Honor Team members enthusiastically learned about the Civil War, women serving in the military and the Japanese Surrender on the U.S.S. Missouri at the end of World War II.

A few of them even got to hold a 45-70 Caliber Springfield Trapdoor single-shot Rifle used in the 1800s that Hoch had donated to the center.

Smiling, Honor Team Member Tony says that holding the gun was his favorite part of the tour. They also tried on various types of combat helmets and saw a tent encampment from the Civil War.

The museum partners with Shining Honor Project and the outing’s purpose was to educate Honor Team members on the sacrifices made by the people serving in our nation’s military.

“It was very encouraging and heartwarming to see how intently our Honor Team members were listening and responding to the curator’s stories that were shared,” said Shining Honor Project Executive Director Erin Wambold.

For Hoch it was an opportunity to give them perspective on who that they are serving with their work.

“The tour gives Honor Team members a sense of who the people are who are under those headstones they are cleaning,” Hoch said.

Nicknamed “Hard Core” for his bravery in battle, Rescorla was a U.S. Army Officer who earned the Silver Star, the Bronze Star, the Purple Heart and the Vietnamese Cross of Gallantry for his part in the 1965 Viet Nam Battle of la Drang, about whom the Mel Gibson movie “We Were Soldiers Once… and Young” is based.

Rescorla would later lose his life on September 11, 2001, in the World Trade Center and is credited with rescuing more than 2,600 people there. He was last seen on the 10th floor headed up to find more survivors when the building collapsed. His remains were never found.

Honor Team members also learned about an all-female crew that flew the B-17 Bomber. It was that point of the tour made Honor Team Members Jessica and Danielle especially proud. And, many expressed empathy for the sacrifice of a woman from Iowa who lost not only her son, but her father and brother in World War II.

“We’re really glad you guys came,” Hoch said to the members of the Honor Team at the conclusion of the tour.
Gatesway Interim Director Gloria Morton responded in kind and said she was thankful for the tour and that she herself had learned a lot of history.

“I learned a lot of the things that went on behind the scenes that I didn’t know previously,” she said. “And for the individuals, this whole Shining Honor Project has been really one of the best things that’s ever happened for them. Because it gives them a sense of purpose, they earn a paycheck, they get out in the community. It’s been a learning experience. They’ve met a lot of people since they started working with the Shining Honor Project.”

For more information about the Broken Arrow Military History Center go to http://www.okmhc.org/.