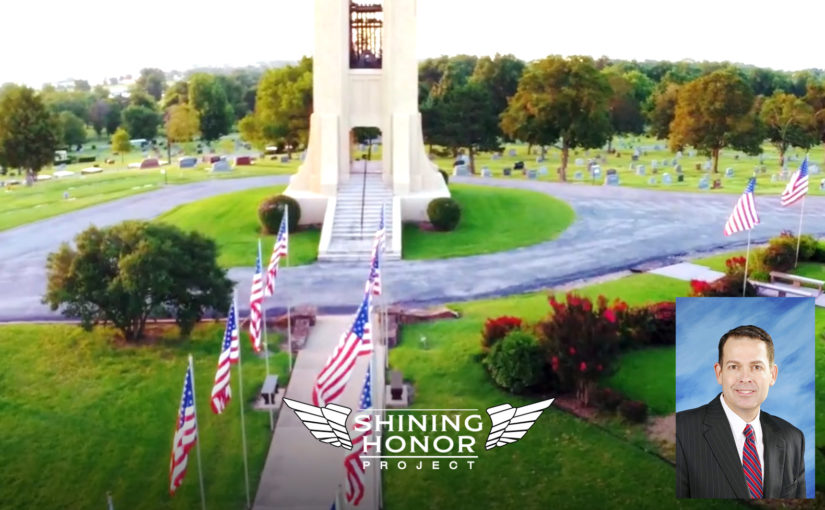 He says he always appreciates local organizations that pay tribute to veterans and their spouses.

“When I first heard about Shining Honor Project, I, of course, wanted to meet them and hear about the details,” he said from his office at 5111 S. Memorial Drive, in Tulsa.

What sets Shining Honor Project apart, according to Felts, is their attention to veterans who may have been forgotten over time.

“To see an organization that focuses on the maintenance and cleaning of those memorial markers and monuments is phenomenal. It is great to see such attention and detail given to those who have passed on years ago,” he said.

Often the family members have died or moved away and there isn’t anyone to maintain the gravesites.

“The extra attention and care to maintain the integrity of those markers is wonderful,” Felts said.

He says the Honor Team members are “wonderful individuals” and to see them working at Memorial Park Cemetery is “uplifting”.

“I was excited and yet disappointed to hear cemeteries were out there that perhaps do not understand the ease of having them working on our grounds. I mean seriously, it’s been such an easy going process.”

“Their work is great and I’ve enjoyed it,” Felts continued. “They are very enthusiastic, there are always smiles on their faces and they are excited to be doing their part for the community.”

At approximately 250 acres, Memorial Park Cemetery is the 10th largest privately owned cemetery in the nation and has been in operation since 1927.

“Our Board of Trustees and management wanted to be on the safe side,” Felts said. “We wanted to be sure it was the right organization, and that every possible scenario had been crossed in order to make sure it was going to work for both sides.”

First, they wanted to be sure the proper chemicals were being used on the gravestones and monuments. They were pleased to discover Shining Honor Project Honor Team members have been trained by Ian Swart, curator at the Tulsa Historical Society, to use the same chemicals the National Park Service uses at Arlington National Cemetery.

“The families can have confidence that it is going to be done right,” Felts said.
Memorial Park’s Board of Trustees also were pleased to learn that Shining Honor Project covers all of the liability insurance for the Honor Team members while they are working.

“We had nothing monetarily to lose, it was all being covered by this group and the wonderful job that they do,” Felts said.

If the weather is forecasted to be warm, they work in the more shaded gardens of the cemetery and Shining Honor provides free-standing pop-up tents for shelter and bottled water.

One of their biggest concerns was the potential for scheduling conflicts with Shining Honor Project working at the same time as a funeral. Often, the cemetery only has a 48 hours notice before an upcoming burial.

However, Felts says it’s been easy to move the Honor Teams to other parts of the cemetery in order for families to have the quiet, respectful graveside services that they deserve and expect.

“Working the scheduling out was a huge thing for us,” he said. “But every little concern has been easily addressed and resolved and it’s just been seamless and wonderful.”

As with every successful relationship, communication is key.

“Any concerns we had were alleviated through great communication,” Felts said. “Any resources that we could provide on-site, whether it be water or restroom facilities, we tried to do anything we could to make it the most accommodating environment to help keep their productivity up and to keep them safe and out of the elements.”

Felts also appreciates the professional appearance of each of the Honor Team members as they work at the cemetery and he said that really stood out to him.

The bright orange safety vests with Shining Honor Project emblazoned on the back make the Honor Team members easily recognizable to everyone visiting the grounds.

“Anytime you would see them out working in their uniforms tending to the graves, it was a very comforting, special feeling,” Felts said. “I like their appearance, couple that with their communication with us and the resources they provide, it was just a win-win for them and us.”

While he expressed his appreciation for so many aspects of the work of Shining Honor Project, he is most appreciative that a local organization is paying tribute to veterans who have gone before us.

“Just to be able to see those before and after photos, to see the amount of care they are giving the memorial markers and monuments,” Felts said. “That’s the most wonderful thing to be able to see the luster brought back into a marker that had weathered over the years and I have enjoyed watching the process.”