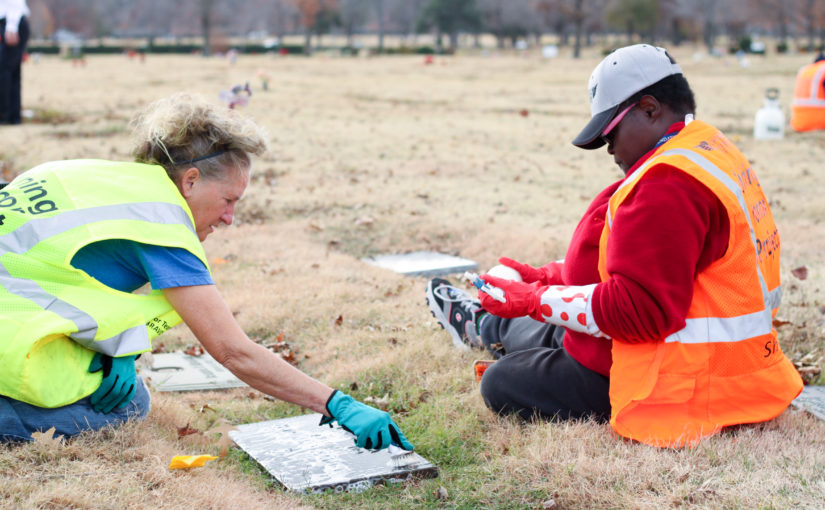 Renee Morrison (Pictured Left), a job coach for the Shining Honor Project, found herself looking at every date and wanting to know the ages and stories behind the names of the veterans buried under the headstones the Honor Team members are cleaning.

Coming from a military family, she realizes the importance of providing this type of service. While she’s always had respect for the men and women serving our country, that respect intensifies day by day as she looks at all of those monuments.

“It really hits you hard when you’re out there looking at these veteran’s headstones; many buried next to a spouse, son or a daughter, brother or sister who have also served,” Morrison said.

Through Shining Honor Project, Honor Team members, who have developmental challenges, are also gaining an understanding of the sacrifices that have been made on their behalf. She’s even seen a couple of the Honor Team members get teary-eyed when talking about cleaning the veteran’s headstones.

Morrison was originally hired as a Gatesway temporary employee to help with the lawn crew, but her skills and dedication led to a full-time job promotion. She now leads two Honor Teams of four individuals.

She says her team members ask her every day, “When are we working again?” To which she tells them, “As soon as it warms up!”

Morrison says she wholeheartedly believes that giving them the opportunity to go out and work and have an income is very important and fulfilling for the Honor Team members.

Recently, she introduced a couple of the people on her Honor Team to the Patriot Guard Riders. This volunteer group of veteran motorcycle riders attends the funerals of military service members as a sign of honor and respect. One Patriot Guard Rider stands at each flag that is placed around the grave site.

Other times, cemetery visitors have seen the vests and asked Morrison about the Shining Honor Project. She gladly tells them what they do. That’s when people make an effort to go out of their way to shake each hand of the Honor Team members and thank them for their work.

Morrison says this is the best job that she’s ever experienced.

“Everyone at Gatesway and the Shining Honor Project has been so supportive and appreciative, even for the smallest things we do,” she said.

Morrison concluded by saying she’s thankful the organization’s founders had the vision to start Shining Honor Project. Their efforts have given an opportunity to the Honor Team members to make a difference and let them live a more independent lifestyle that may not have been possible otherwise.