The Sheriff Of Gatesway Is Gone 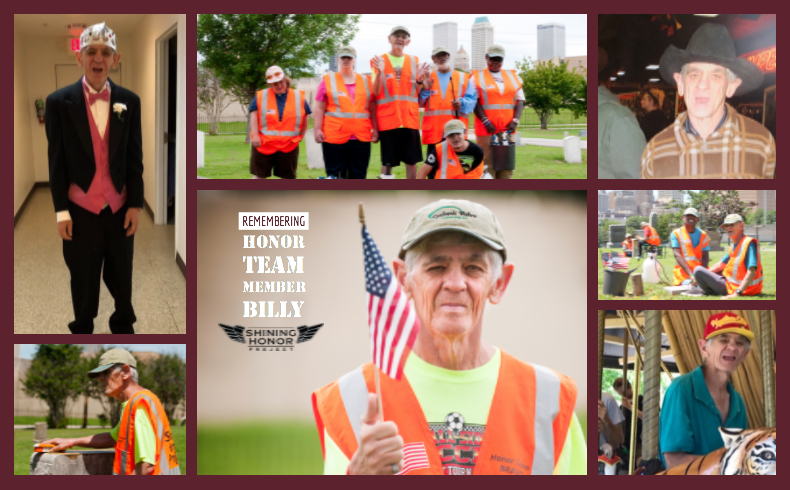 The Sheriff Of Gatesway Is Gone

Billy Horton was a cowboy and has been called the Sheriff of Gatesway. He liked wearing his boots and Cowboy hat and was particular about where he hung the Western Art on his bedroom walls.

He would roam the Gatesway campus and check to make sure all of the doors were locked at the end of the day. Billy had been a part of the Gatesway family for more than 40 years and a Shining Honor Project Honor Team member for the last year until his death at age 61, in February.

Anne Wesenberg-Acker picked up a small, brown bear sitting on the corner of her desk, the Gatesway Foundation administrator smiled and remembered the day Billy gave it to her.

“This represents a part of Billy, Acker said. “He won it at Bingo and decided I should have it.”

Billy had a generous, loving spirit and was known to pick flowers, be it Dandelions or even Pansies from the flower beds, just to brighten someone’s day.

Since his passing, Acker and others have been remembering Billy and paying it forward by picking flowers and giving them away as a “Billy gesture.”

“Every single one of us has good memories of Billy,” Acker said. “Even yesterday, somebody was having a hard day, so I picked one of the yellow flowers in the yard and gave it to her as a reminder of something Billy would have done.”

He was a sweet, loving man with a big heart.

“When he first got his Shining Honor Project vest, you know he slept in it for a week,” Gloria Morton, Gatesway CEO, said with a deep hearty laugh. “It took us a while to get it off of him before he went to bed.”

Morton says he really appreciated the importance of the work the Honor Team performs.

“That meant a lot to him because he really did understand why they were doing the work,” Morton said.

Billy understood they were cleaning headstones to honor the veterans. As the son of a veteran, Billy knew how to salute, how to stand at attention and how to honor the flag.

“I think that’s why he enjoyed it more than anything,” Morton said.

Catherine Geddings, Billy’s House Mom and best friend, said it wasn’t until his involvement with the Shining Honor Project that they learned that he could read.

“He could read every single name on the headstones and he knew which ones were veterans,” she said.

Billy would often help re-direct his fellow Honor Team members should they start to clean a gravestone that didn’t belong to a veteran.

He was a man of very few words, but great emotion and was always ready for a hug. Though he didn’t say a lot, he didn’t have to according to Acker. Billy just wanted people to love him and wanted to demonstrate his love toward others.

Billy and Morton had coffee together every morning. She taught him how to make the coffee and he then taught himself how to make it to her specifications.

“He’d make his cup first, and then mine, and he made it exactly the way I like to drink it every time,” Morton said. “I looked at him and said, ‘You remember that don’t ya?’ And, he said, ‘I do’.”

“Now, I come in every morning and it’s just me having my coffee, you know?” Morton said.

Geddings, who has worked at Gatesway for four years, says since her first day on the job, Billy was her sidekick.

“He just was my tail, wherever I would go, he was not far behind me. He knew where I was at all times,” she said.

In addition to the Gatesway and Shining Honor Project families, Billy became a part of the Geddings family. He would go to her home for the holidays and her children ages 14, 13 and 8 loved Billy as well.

She bought him holiday gifts and that always made him cry.

“I learned quite a bit from Billy, honestly, I really did,” she said.

She recalls when she first came to Gatesway having never worked with developmentally challenged individuals before. She says she was hesitant and standoffish, not wanting to get attached to the residents.

“But Billy had me from day one,” she says.

Morton says she is continually inspired by people like Billy with cognitive disabilities, in that though they have difficulties and problems they continue to get up, start over and move forward every day.

“There are some who struggle just to get out of bed because they have a physical disability, she said. “But that doesn’t stop them, they never give up. If they can overcome their problems, I can do it too.”

Geddings wipes away tears as she remembers her friend.

“I miss every day walking in and Billy smiling and hugging me,” Geddings said.
Morton agreed.

“We have a lot of fond memories of Billy and he will live in our hearts forever,” Morton concluded. “He’s missed very much.”